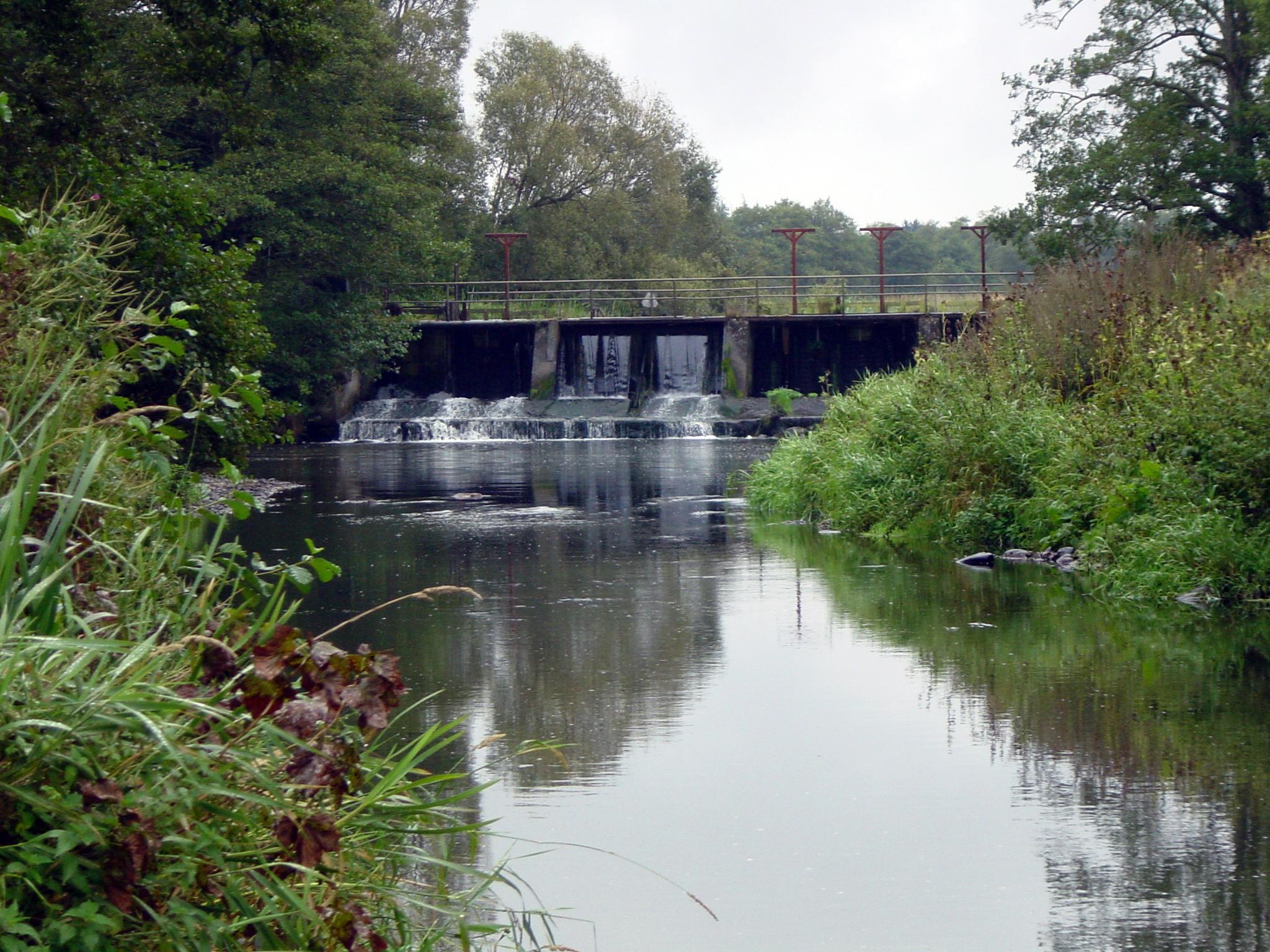 The dam at Vilholt before removal © Jan Nielsen and Finn Sivebæk, DTU Aqua

River Gudenaa is one of the largest rivers in Jutland, Denmark, running for approximately 149 km before entering the Randers Fjord. In 1866, the Vilholt hydropower dam (Vilholt Mølle) was built in River Gudenaa. Since 1987, the local authorities (Vejle County and Horsens Municipality), along with the National Forest and Nature Agency debated with stakeholders for the removal of the Vilholt Dam to restore natural river conditions and fauna passage. The dam was finally removed in 2008 after nearly two decades of debate. 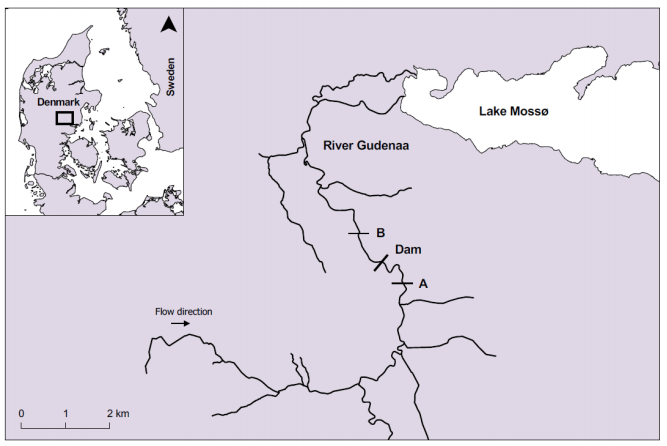 The Vilholt dam was located in the Gudenaa river system, in central Jutland, Denmark, until 2008. The upstream and downstream sampling locations are represented by letters A and B, respectively (Birnie-Gauvin et al. 2017).

Lake Mossø is located approximately 6,5km downstream of where the dam used to be. The river system is now home to a large population of brown trout (S. trutta), with Lake Mossø serving as highly productive feeding grounds for lake dwelling brown trout (herein referred to as lake trout). These lake trout originate from the spawning and nursery areas of River Gudenaa, migrate down to the lake to feed, and return to the river to spawn.

Starting in 1997 through 2016, electrofishing surveys were conducted (end of August to beginning of October) 1.5km upstream of the dam within the ponded zone, where original spawning habitat was re-established post-removal. It is worth noting that this type of habitat, with high-gradient and fast-moving waters, is scarce in larger Danish streams due to years of human alterations, making this location of particularly high interest. A second location was surveyed from 1987 through to 2016, 1.5km downstream of the dam. This stretch was recognized as excellent for spawning, even before the dam was removed. 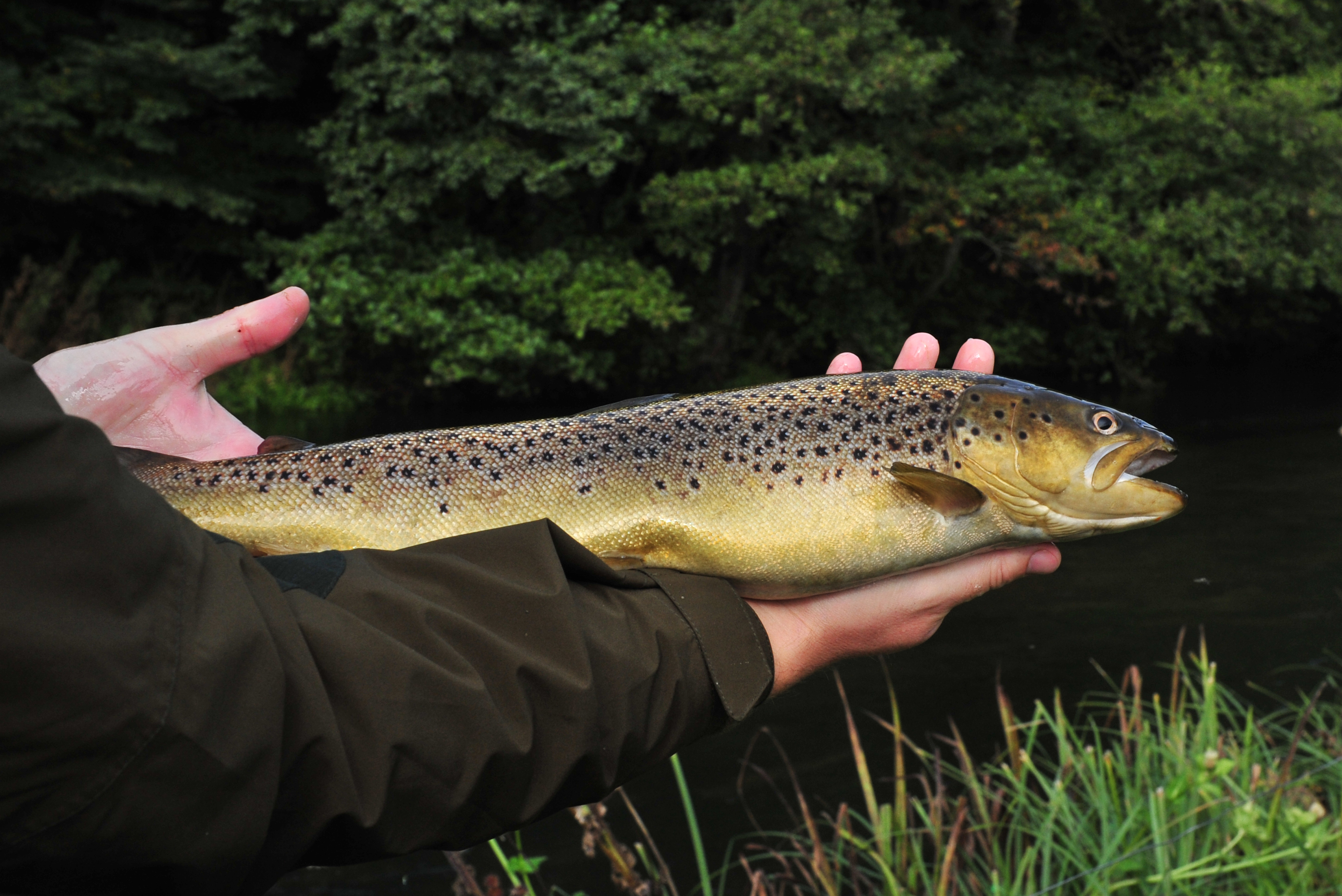 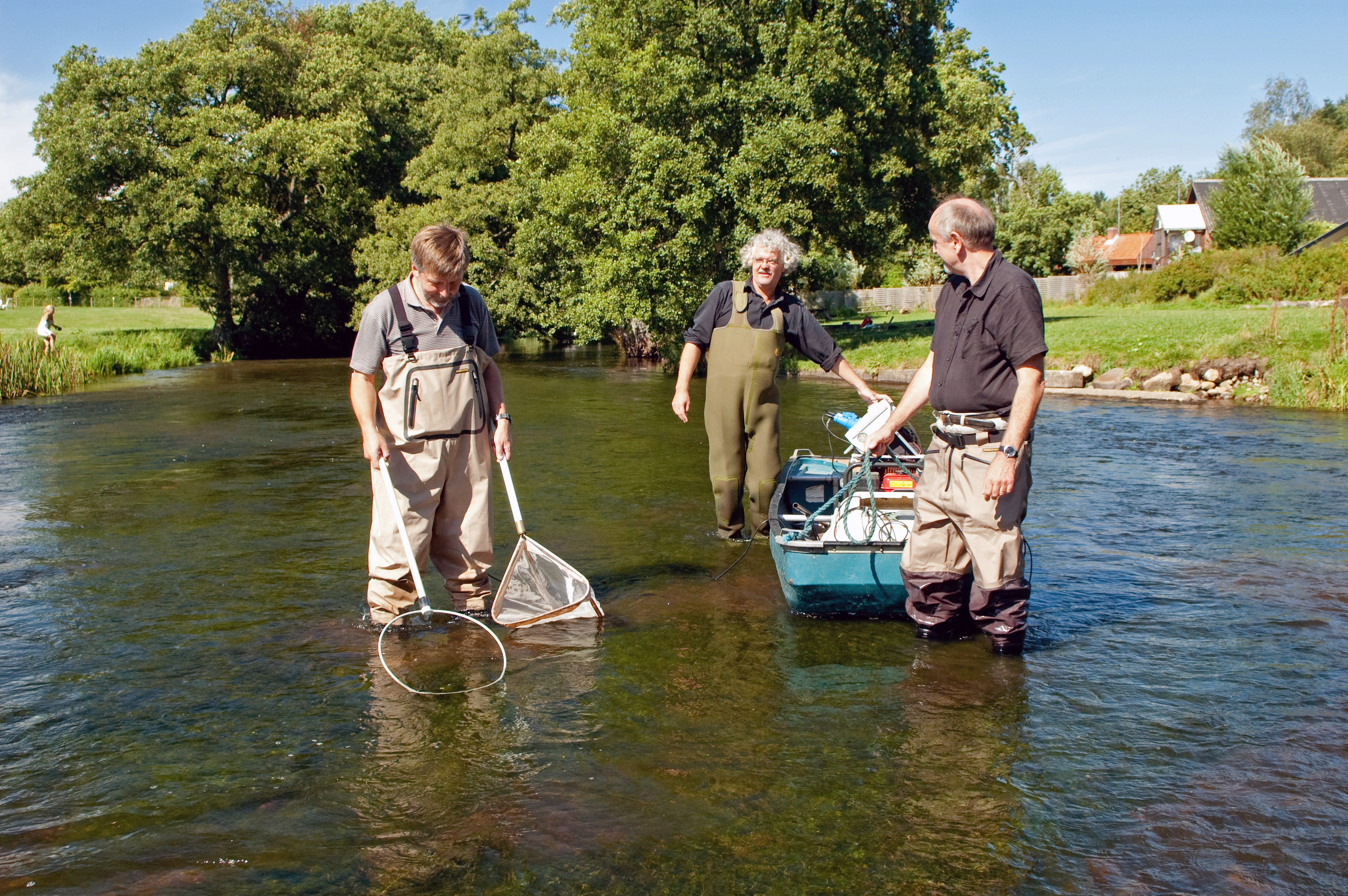 The situation before and after removal, up and downstream of the dam, was subject to a thorough scientifically-based monitoring programme. The Technical University of Denmark (DTU) carried out electrofishing surveys, and this resulted in good data on fish migration and fish populations over a period of 30 years.

Prior to removal, the decreased velocity and increased water depth in the ponded area led to the accumulation of sand and silt on the bottom, with a minimum water depth of approximately 0.7m. Fish density per meter was very low.

Following the removal of the dam, the ponded zone disappeared and the natural shallow water habitat was restored to its original state, with faster-flowing water, a water depth of 10-50cm, a natural substrate dominated by stones and cobbles, the original gradient (approx. 0.3%) and the presence of water riffles, thus highly suitable brown trout (S. trutta) spawning and nursing grounds.

The removal of the Vilholt Dam restored the naturally adequate trout habitat in the former ponded zone, resulting in an immediate increase in both YOY and OLD fish upstream in 2009. This is likely because the removal allowed for the upstream passage of spawners from the lake, along with providing highly suitable habitat for young fish to thrive, thus increasing both spawning success and survival. The removal had little physical effect on the downstream habitat, which was already suitable for spawning. We note that beginning in 1992, an increase in OLD fish was observed downstream. This is due to the establishment of a fish ladder at a dam located between Vilholt and Lake Mossø. This fishpass led to a larger YOY density in 1993.

We also note that a sudden decrease in fish was observed in 1994; a large storm caused the dam to break down, letting large amounts of mud and silt to be flushed downstream, practically eliminating the year class. The year following removal (2009), neither YOY nor OLD fish densities increased downstream of the dam. In 2011, a large increase in YOY individuals downstream was observed. The large increase in YOY upstream in 2009 would have yielded a large smolt cohort (length 12-15cm) which likely migrated down to Lake Mossø. These individuals would then be returning to spawn in both stretches in winter 2010-2011, likely contributing to the large YOY density observed in 2011 both upstream and downstream of the former dam. Furthermore, it is also possible that YOY from upstream moved downstream to find suitable habitat if the density of fish is too high upstream. 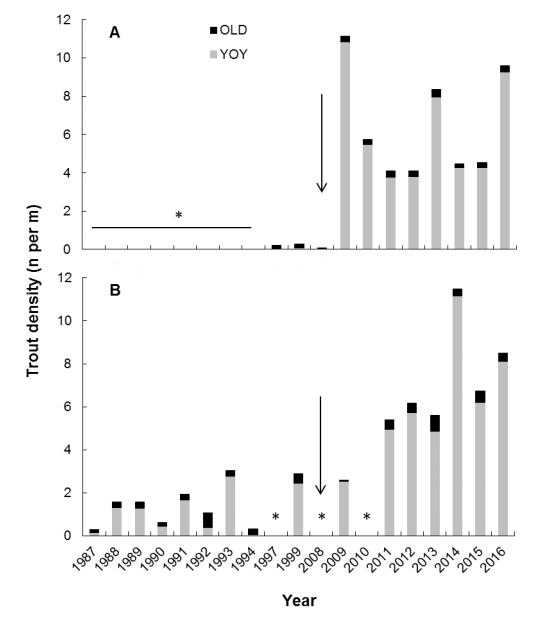 Brown trout (Salmo trutta) density (number of individuals per metre of river) upstream (A) and downstream (B) of the Vilholt dam; dam removed in 2008; * indicates no data (Birnie-Gauvin, 2017).

This shows that barrier removal can be beneficial for fish density especially upstream of a barrier, but also downstream and have system-wide positive effects on biodiversity and overall population sustainability. Since the removal, local anglers have also noticed an increase in the size and number of lake trout caught in Lake Mossø. 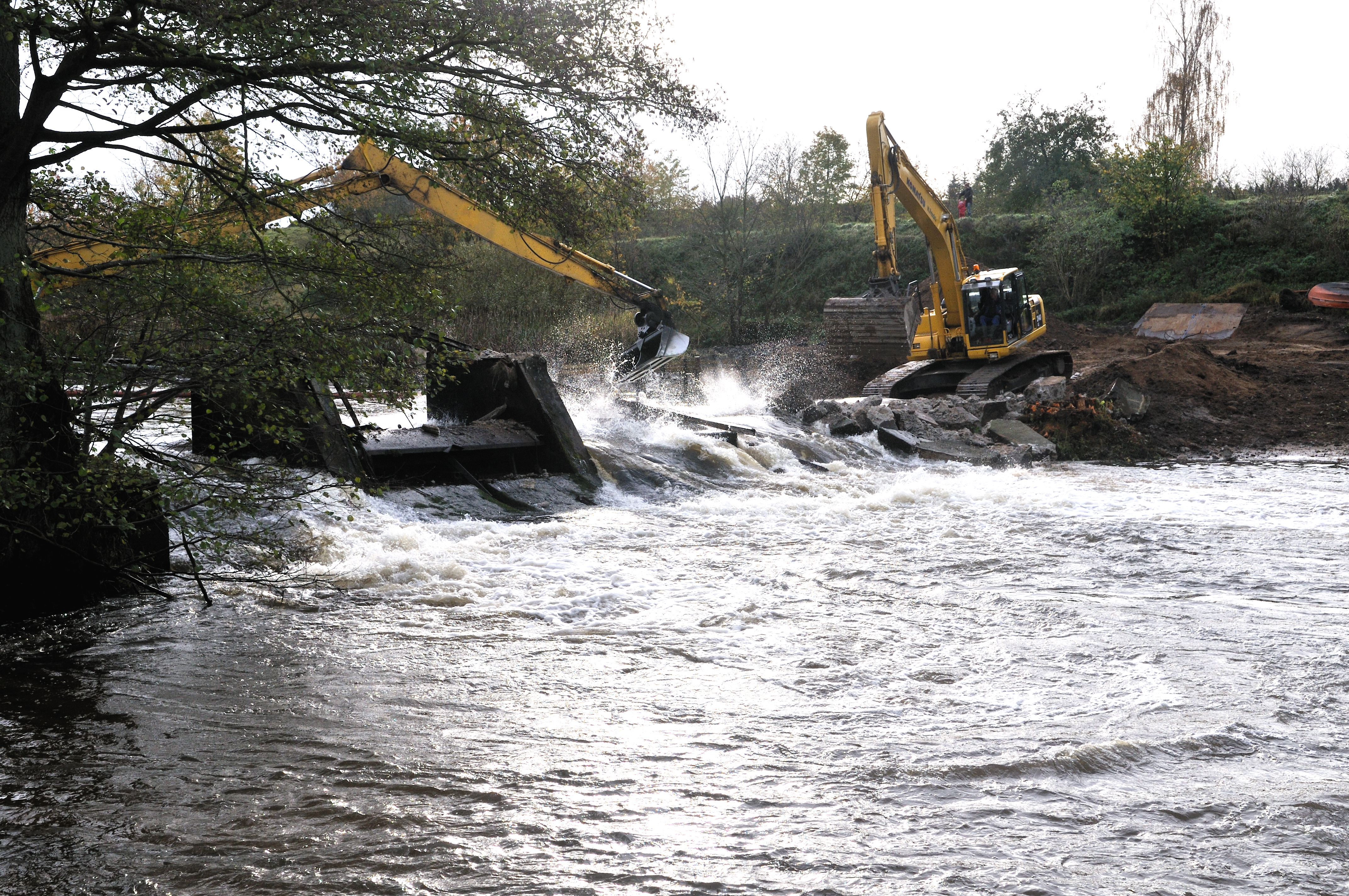 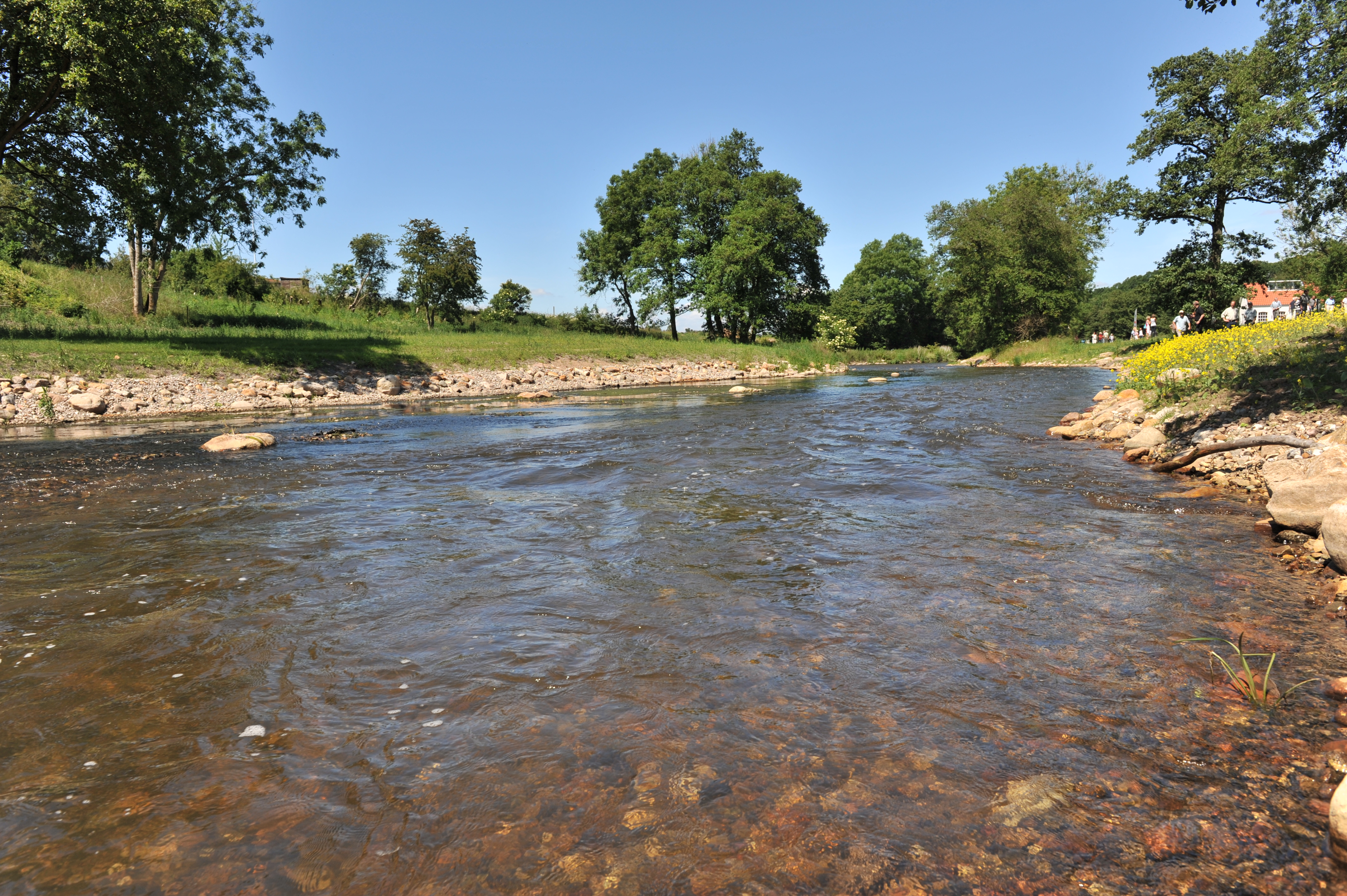