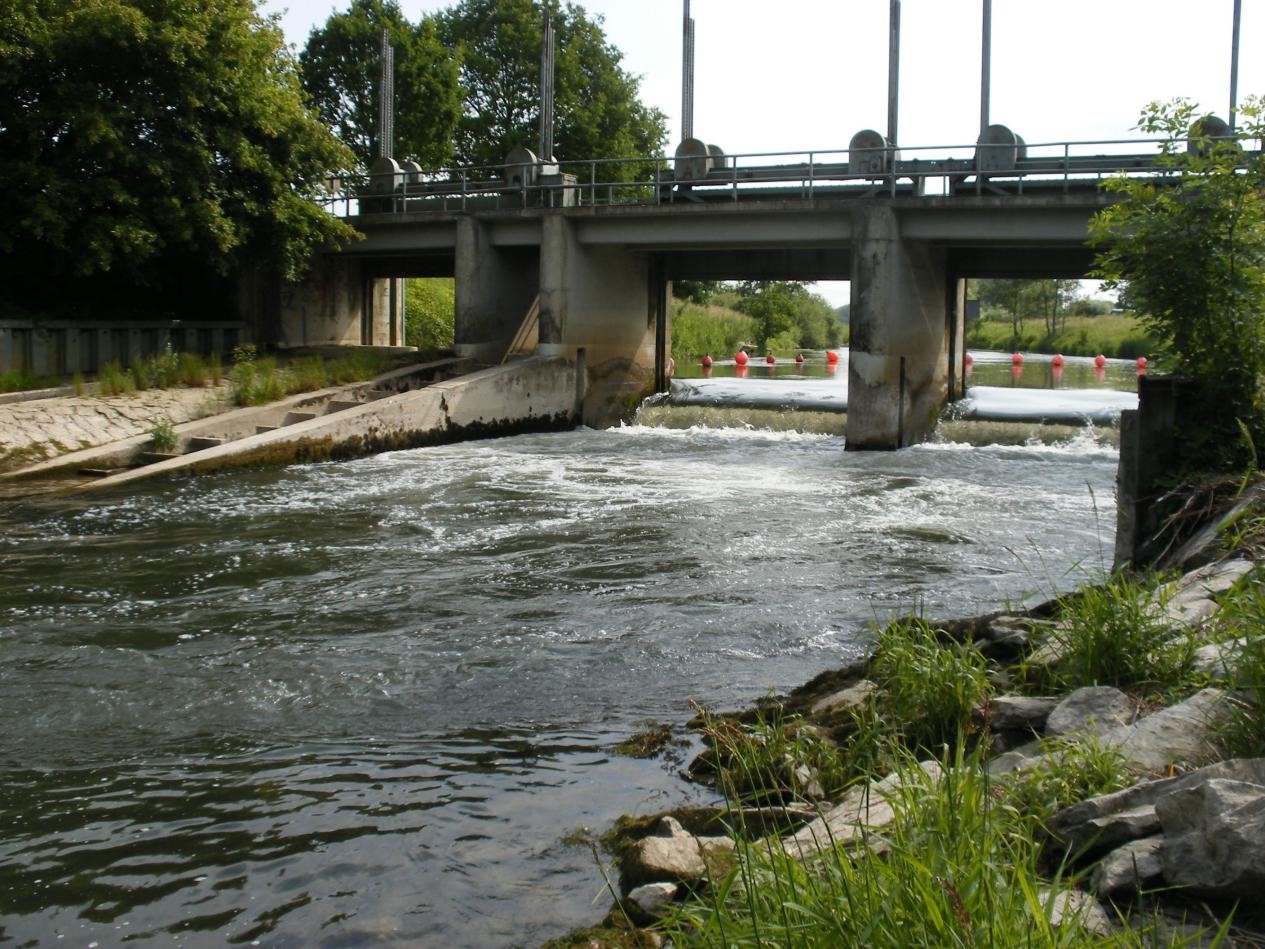 The Lippe River flows through the state of North Rhine-Westphalia in western Germany. It is 220.3 kms (136.9 miles) in length and is a right tributary of the Rhine. Its source is located at the edge of the Teutoburg Forest and it runs west through the cities of Paderborn and Lippstadt, then along the northern edge of the Ruhr area until it finally enters the Rhine at Wesel.

The District Government of Arnsberg in North Rhine-Westphalia is the responsible body for the maintenance of 112km of watercourses on the Lippe and Ruhr rivers.

Since the 1980s, Germany has been promoting the restoration of its rivers and streams and, with the Water Framework Directive in 2000, this gave stricter targets for Europe-wide water and habitat quality. In North Rhine-Westphalia, the region’s ‘Living Waters’ programme aims to fulfil the objectives of the WFD and, consequently, weirs have been removed on the Lippe and large restoration projects been carried out.

The Lippe had been an important river for migratory fish in the past as the water quality was good and this gave rise to a thriving fish population including sometimes salmon. Thus there was the potential to improve fish populations but the morphological conditions in the river as a whole were unsatisfactory. Starting in 1996, projects to restore the river were realized at other sites (Klostermersch, Lippeseeumflut, Hellinghäuser Mersch, Goldsteinsmersch) and fish populations gradually increased. This created the need to improve passage for migrating fish and ecological continuity.

As a result of river straightening and bank strengthening in the 19th Century, the flow rate of the River Lippe had got faster and the river bed was subject to vertical erosion making it more difficult for farmers to irrigate their crops. Towards the end of the 1800s, five weir systems were constructed near the city of Lippstadt to improve conditions for agricultural production.

At Lippstadt-Esbeck, Weir 1 was built by a local agricultural co-operative and was one of sixteen obstructions to fish passage on the Lippe. In 1936, it was destroyed by a high-water flood but rebuilt in 1937. Over the years, Weir 1 continued not only to hinder the migration of fishes, in spite of a fish ladder being installed, but also to disrupt the habitat for other rheophilic species that live in fast-flowing currents. The weir was also a dangerous barrier for water sports enthusiasts. 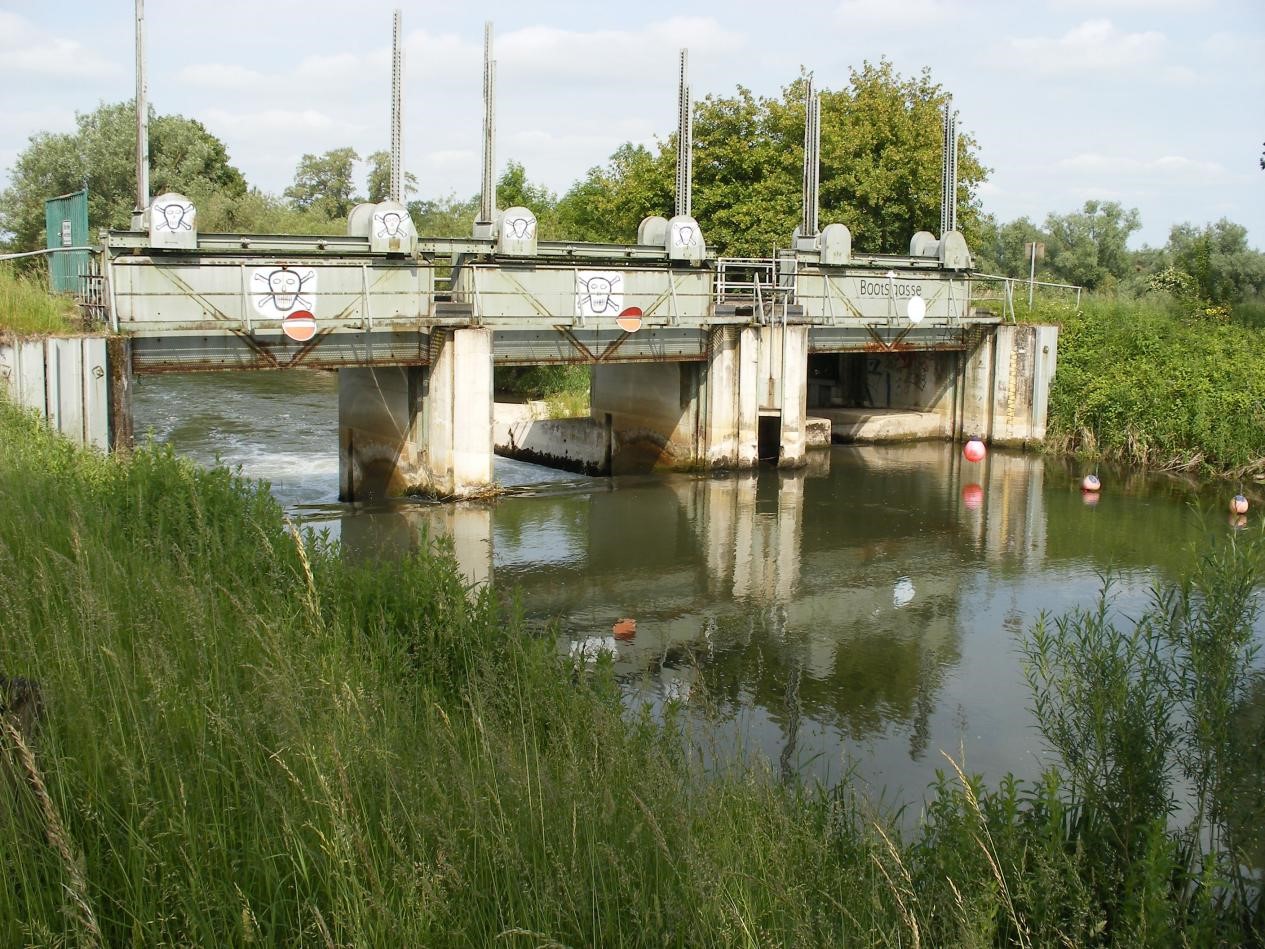 Weir 1 – view from upstream with a chain of buoys directing canoeists to the boating lane on the far right- hand side.

The concrete, timber and steel structure of the weir was around 20 meters long, 10 meters wide and the difference in height between the upstream and downstream water levels was one meter at medium run-off.

The length of river upstream which was negatively affected by the weir was 28kms until the next large barrier but there are also smaller barriers only a few kilometers upstream which also affect fish passage. Better passage is possible but improvements are needed especially during times of low water flow. The planning process to demolish weirs 2, 3 and 4 has already started and the removals could take place in 2021 if finance permits.

Planning the removal and cost

The Arnsberg District Government has a scheme to develop the length of the Lippe that is within its responsibility to a natural or near natural state – what it calls an ‘ecological development concept’. The removal of Weir 1 was a part of this scheme and was chosen for removal for three reasons:

The aims of this removal were:

In 2009, the District Government of Arnsberg decided to replace the weir with a structure that was compatible with the passage of freshwater organisms. The superstructure of the weir, including its one-meter high sill, would be demolished and the difference in height between the upstream and downstream riverbeds would be compensated for by eight stone crossbars placed in the riverbed, each one allowing for a drop in height of 12cms. This was in line with the gradient requirement for the barbel region which is 1:300.

There were several stakeholders involved in the decision: those organisations and government departments holding a public interest; the local nature conservation group; the local fishing club; and agricultural associations.

Previous records for fish species were able to be evaluated in advance of this removal as fish stock surveys had been carried out continually on the Lippe downstream of Lippstadt since 1995. Historical records were also consulted.

Fish surveys and surveys of other relevant species were carried out prior to the construction work. This reach of the Lippe lies in the transition between the grayling and barbel regions and, in considering the specifications for restoration, the requirements for the barbel region were chosen – a substrate of coarse-grained sand and fine-grained gravel with a weak current and a rich riverside vegetation. The primary target species was the burbot Lota lota, which is considered highly endangered in Germany.

The total budget for removal was around 700,000 Euros. The funds came from resources earmarked for the ‘Living Waters’ programme.

In 2010, over a period of five months, Weir 1 was finally removed. Those involved in the planning and demolition were the client, competent authorities in water management and hydraulic engineering, and the construction company.

The stages of removal were: 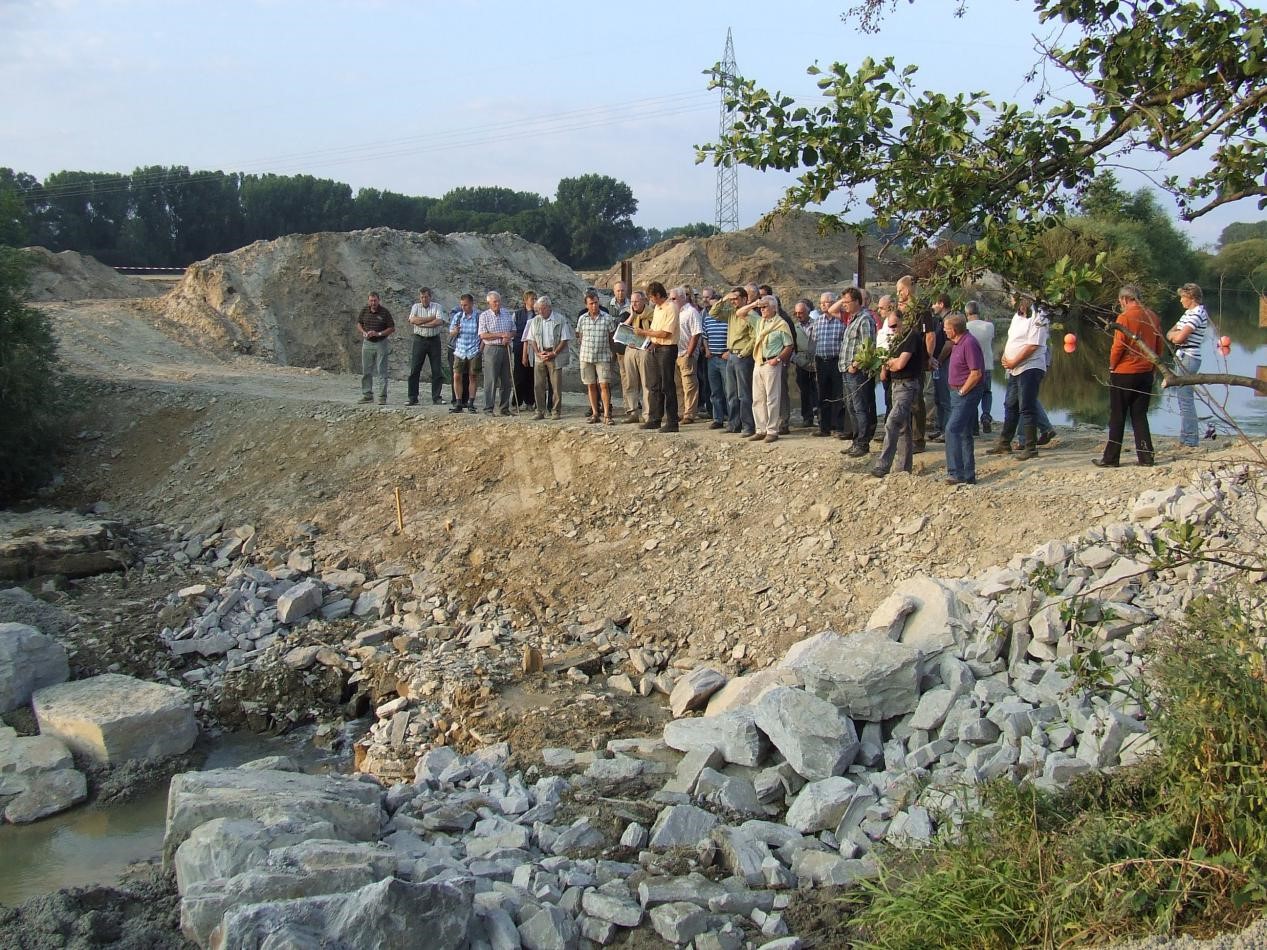 July 2010 – The temporary barrier diverting the river into the bypass channel made a good vantage point for viewing the drained construction area. 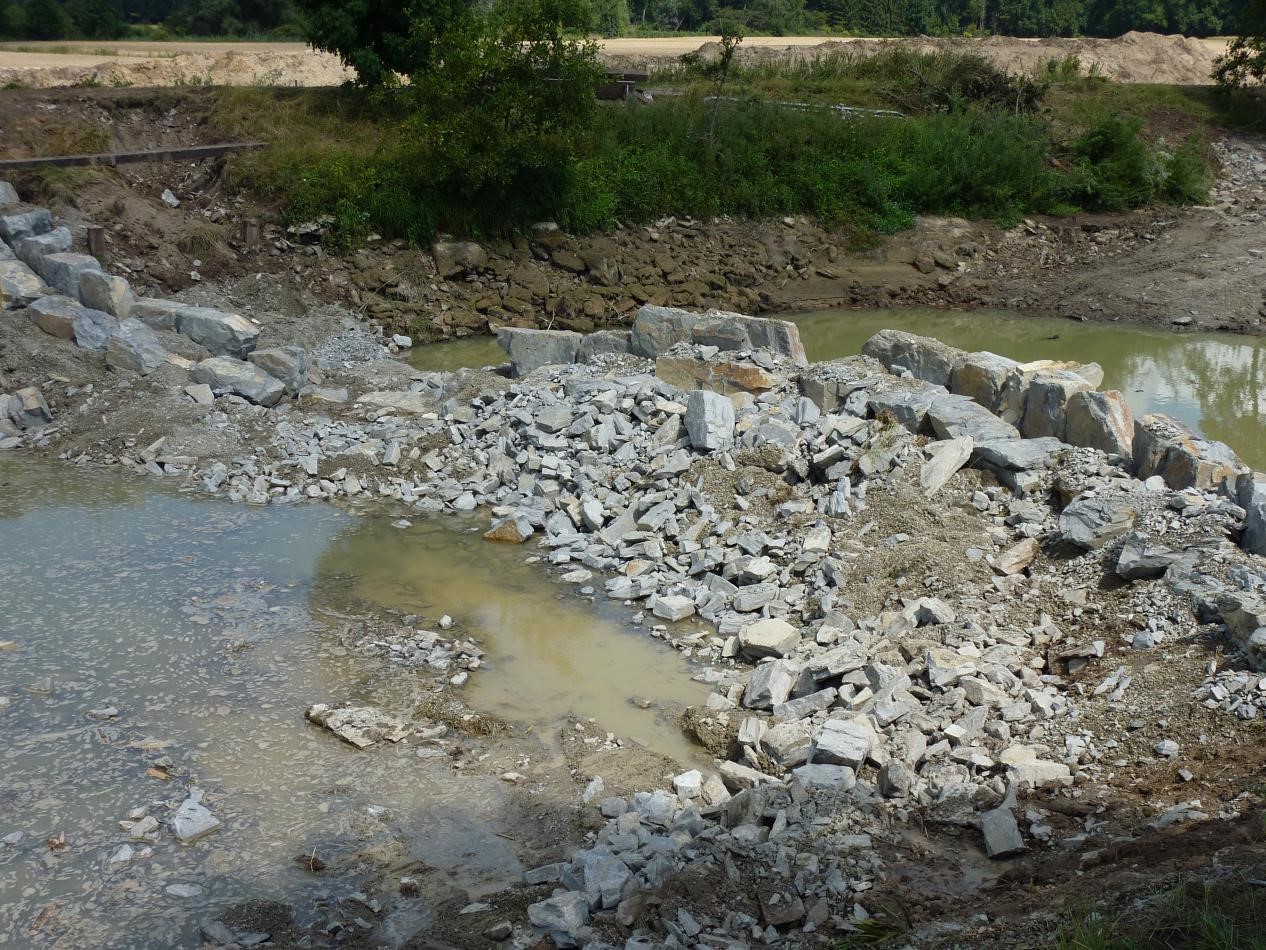 July 2010 – Stone crossbar construction in the drained riverbed. The bypass channel is behind the vegetated bank. 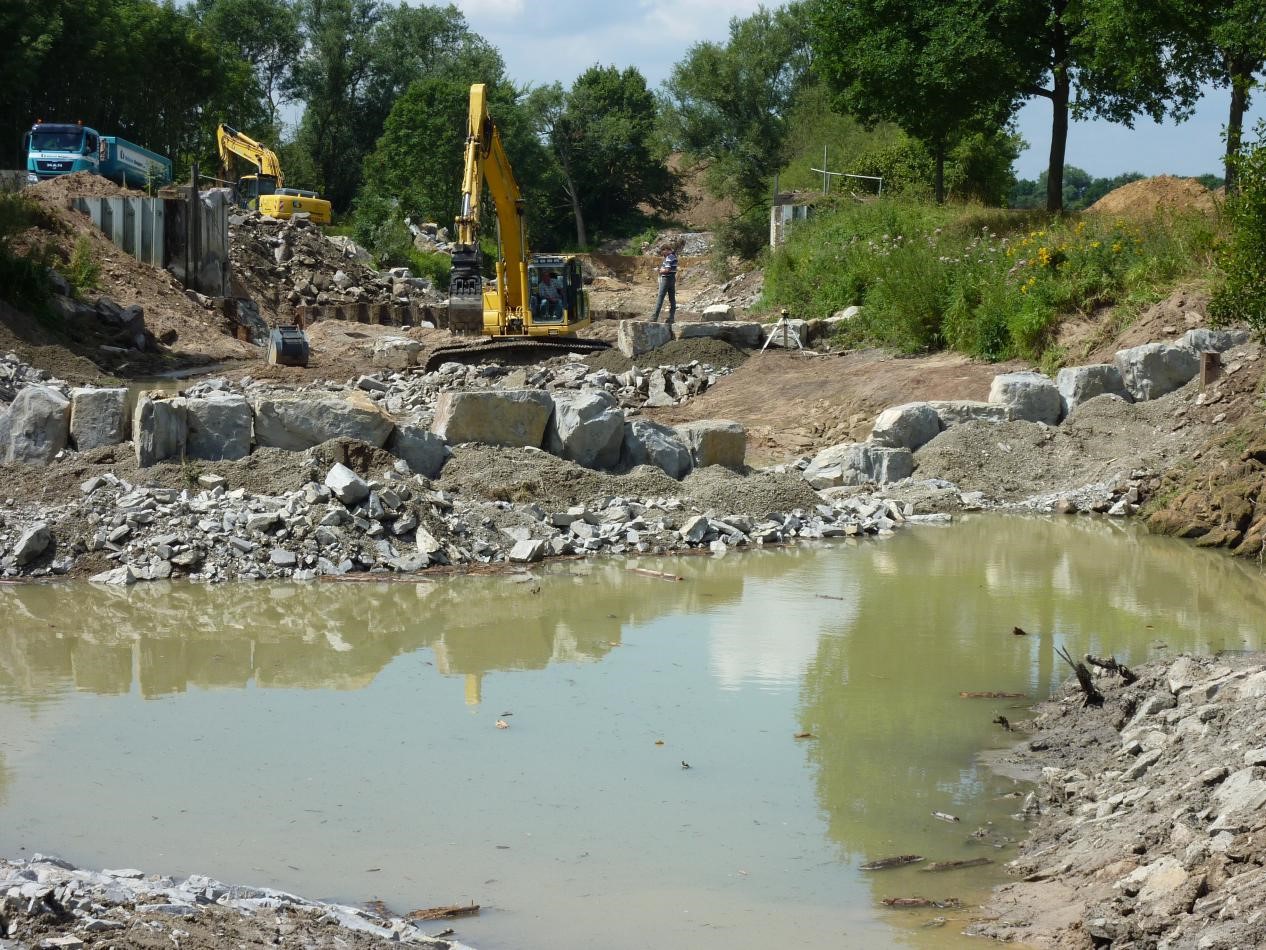 July 2010 – The series of crossbars under construction in the drained riverbed. The old weir abutments can just be seen on either side of the digger. 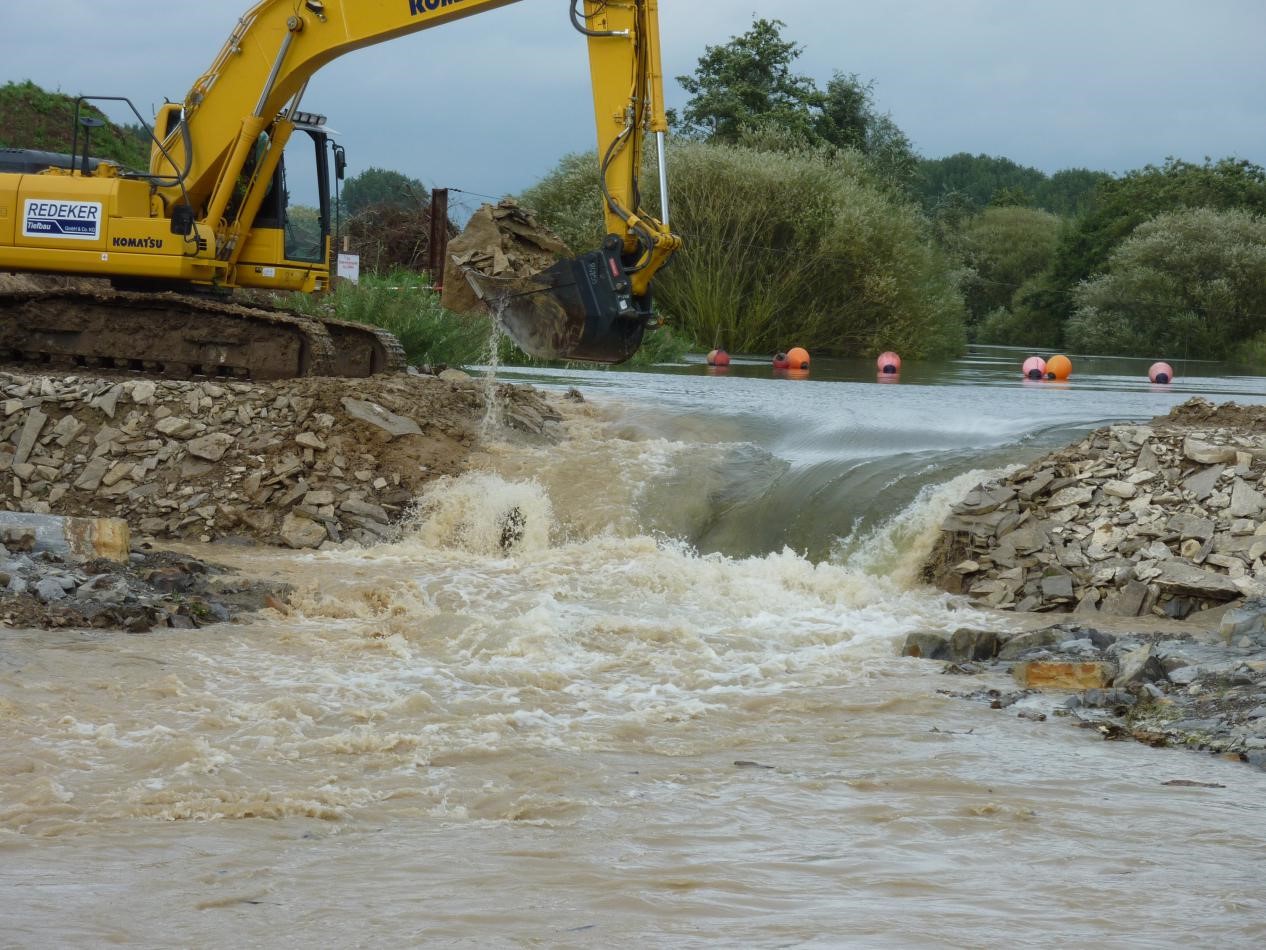 August 2010 – The temporary barrier is breached to allow the Lippe to flow normally. 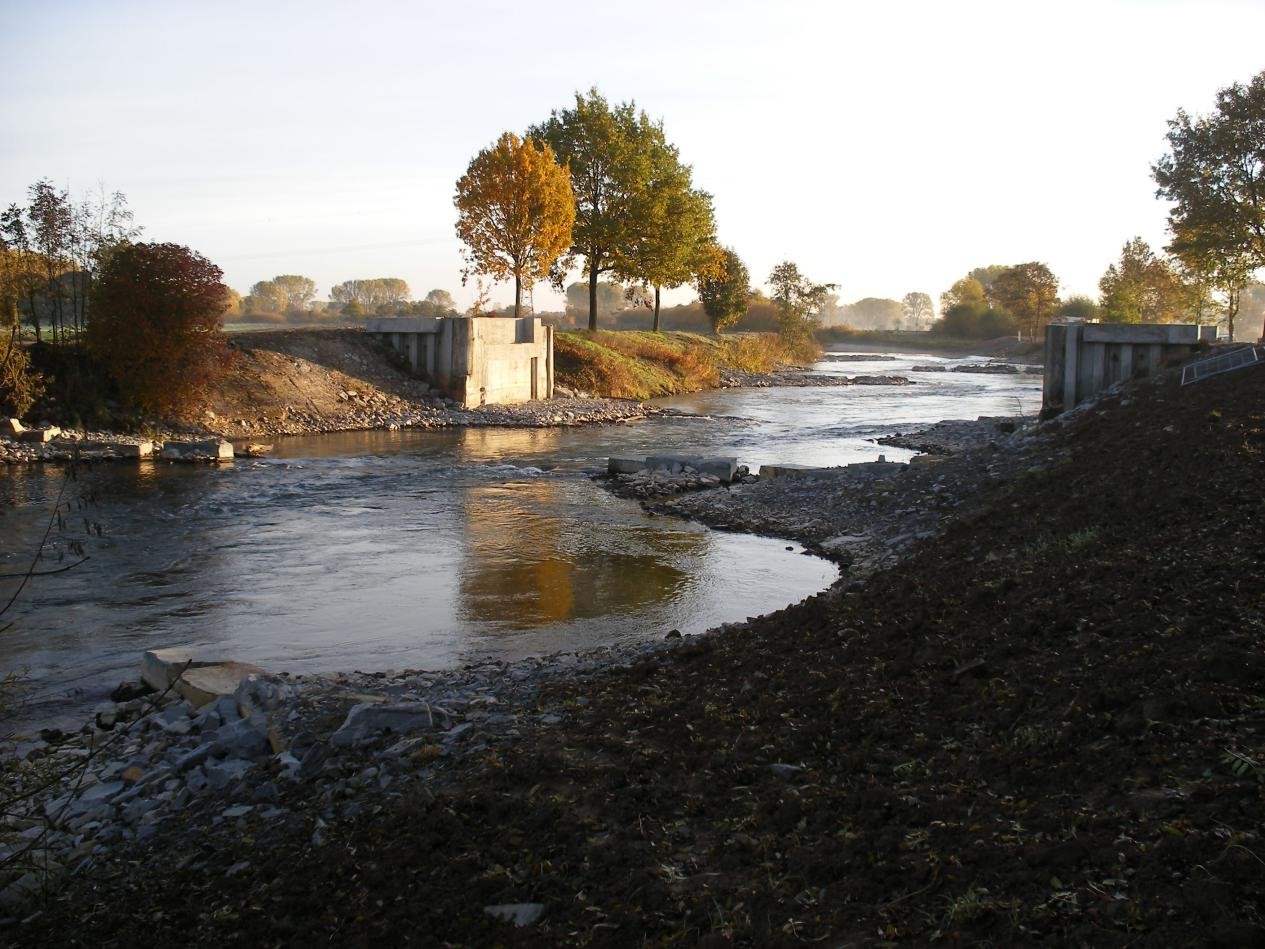 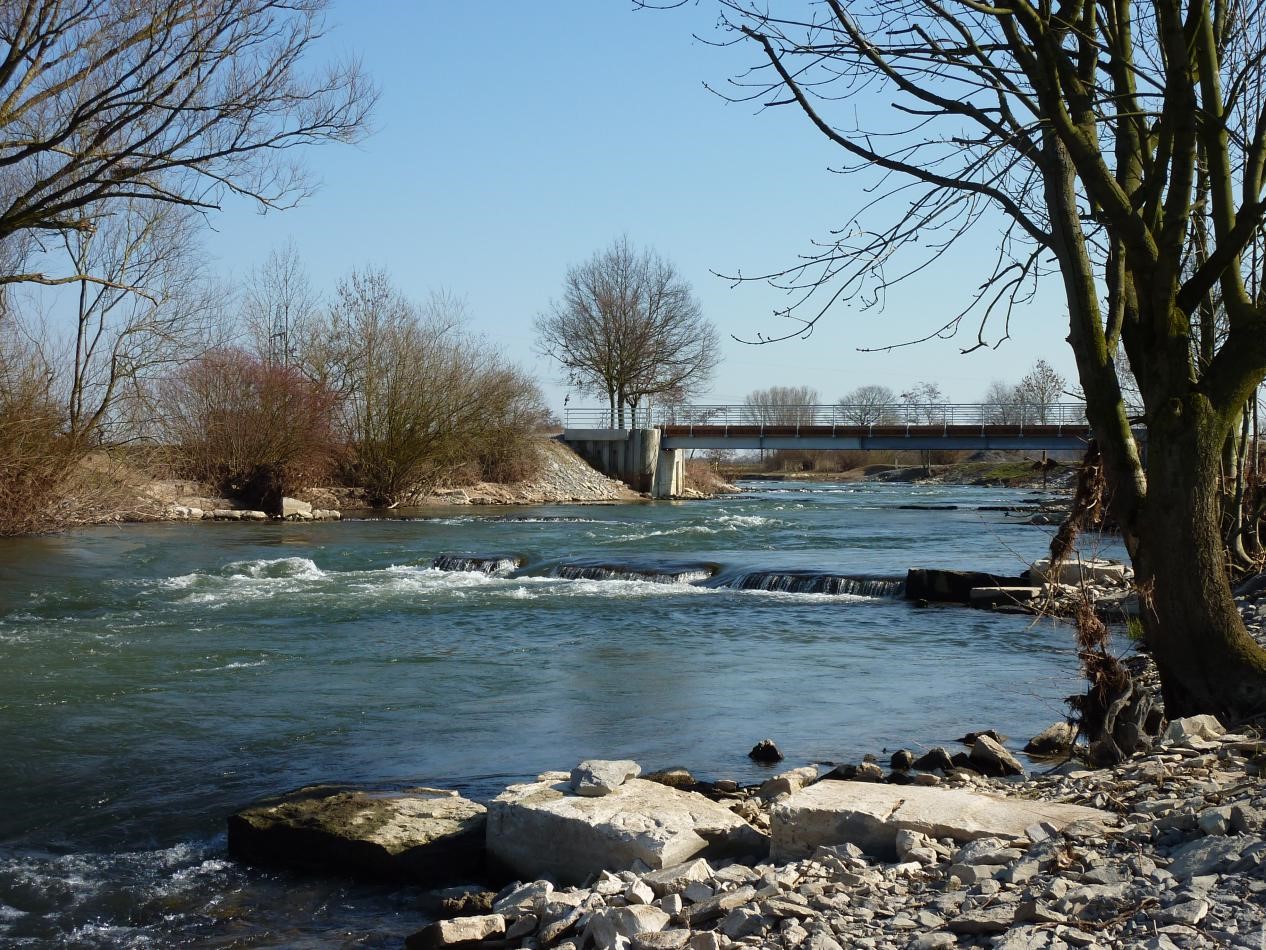 View towards the old weir site with the new bridge in place and stone crossbars in the water.

Local people took great interest in the weir removal and the construction site became a destination for visitors and guided tours. 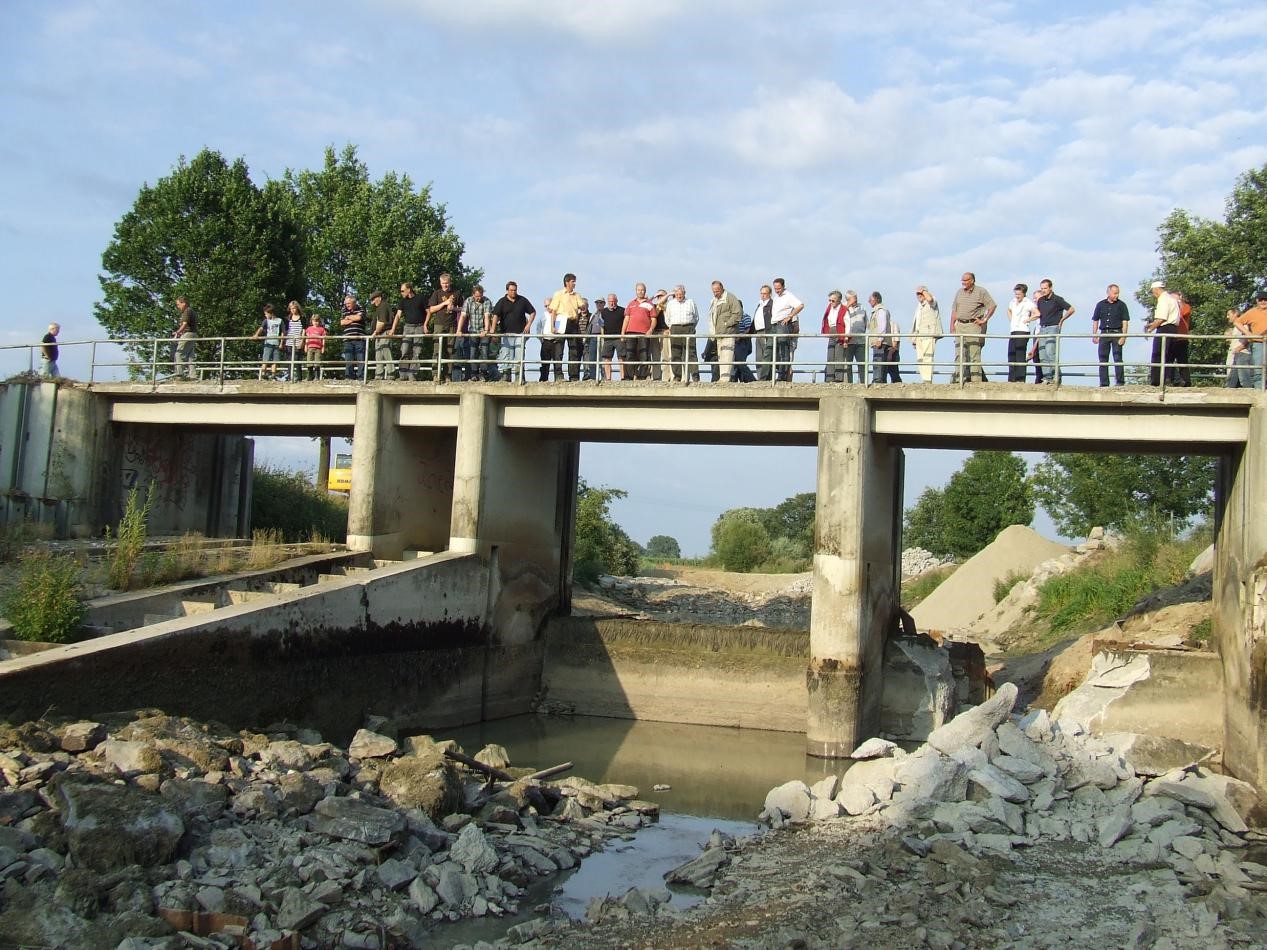 July 2010 – an evening tour of the site for local people before the concrete structure had been demolished.

The success of the project was celebrated at an opening ceremony organised by the District Government. This was followed by an afternoon of official events at the weir site. Around two hundred people attended. 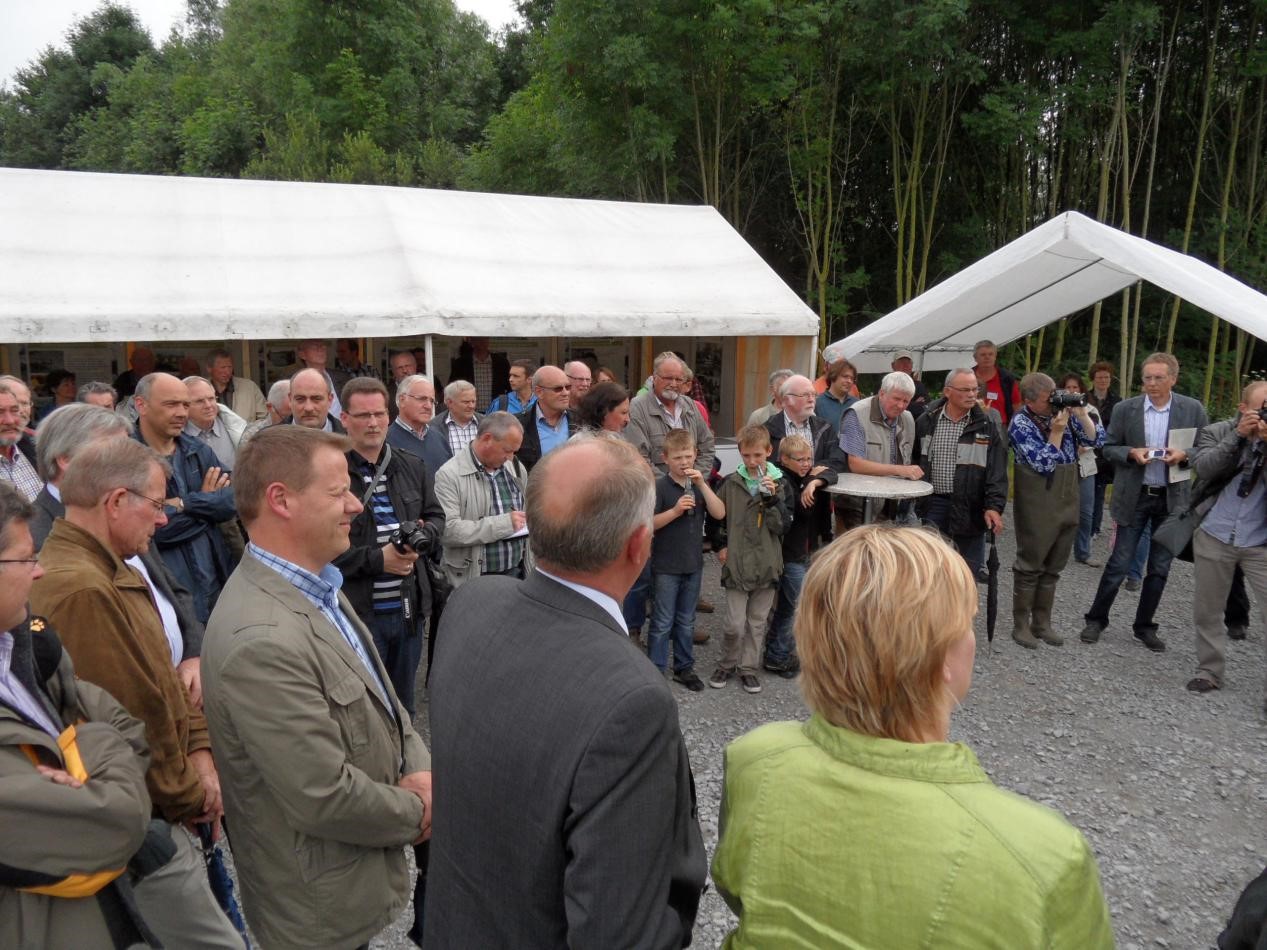 27th June 2012 – Guests listen attentively to a presentation at the official opening. 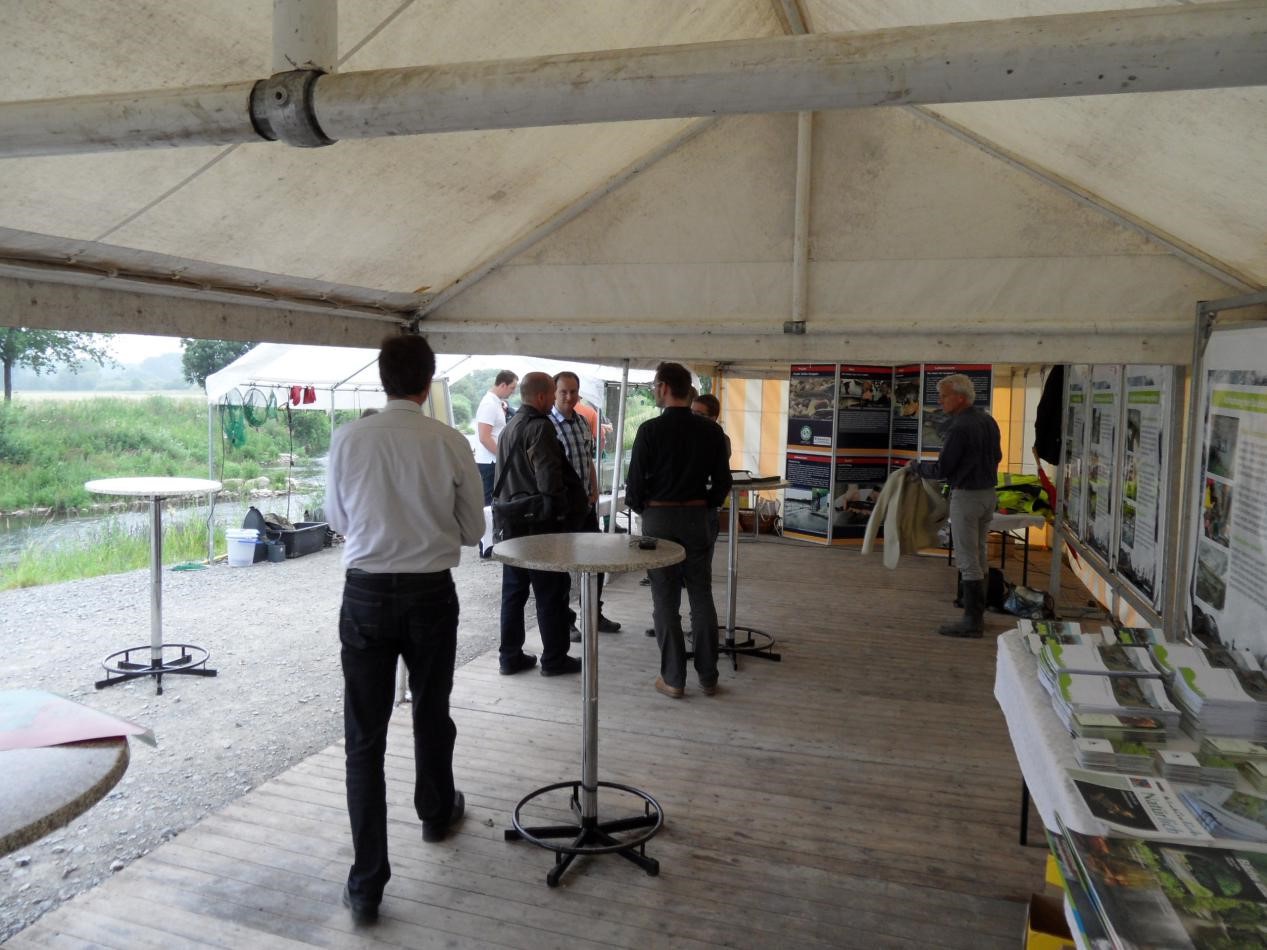 27th June 2012 – The exhibition tent at the official opening of the reconstructed weir.

There was no change in the prevailing conditions of water flow from upstream but within the site of the old weir, and in the areas between the crossbars, the ‘barrier effect’ was immediately lifted. Fishes could swim across the weir site and traverse the difference in height of the riverbed without any difficulty. A mosaic of varying substrates has developed which has created a rich habitat around the former weir site.

The river was not monitored immediately after removal but a two-year survey of the entire fish population of the Lippe is currently being carried out by a fisheries association and a group of conservationists. This survey finishes at the end of 2019 and, after the results have been evaluated, may reveal the longer-term effects of the removal on fish species.

The local human population has benefited from this reconstruction. Conditions have been made safer for canoeists: they can navigate along this stretch of the river without any hindrance and with just a hint of whitewater. 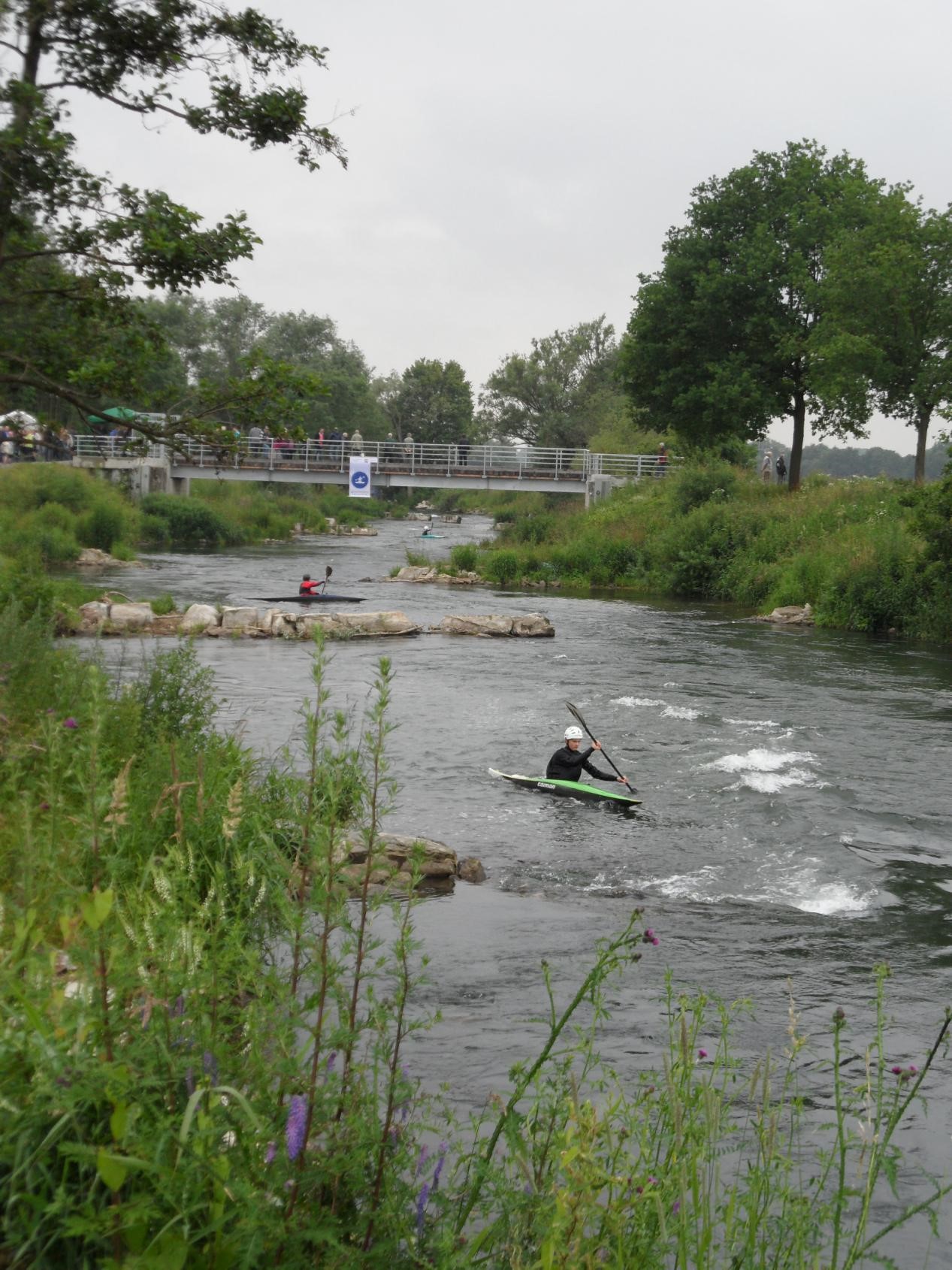 27th June 2012 – Canoeists navigating round the crossbars watched by spectators on the new bridge. 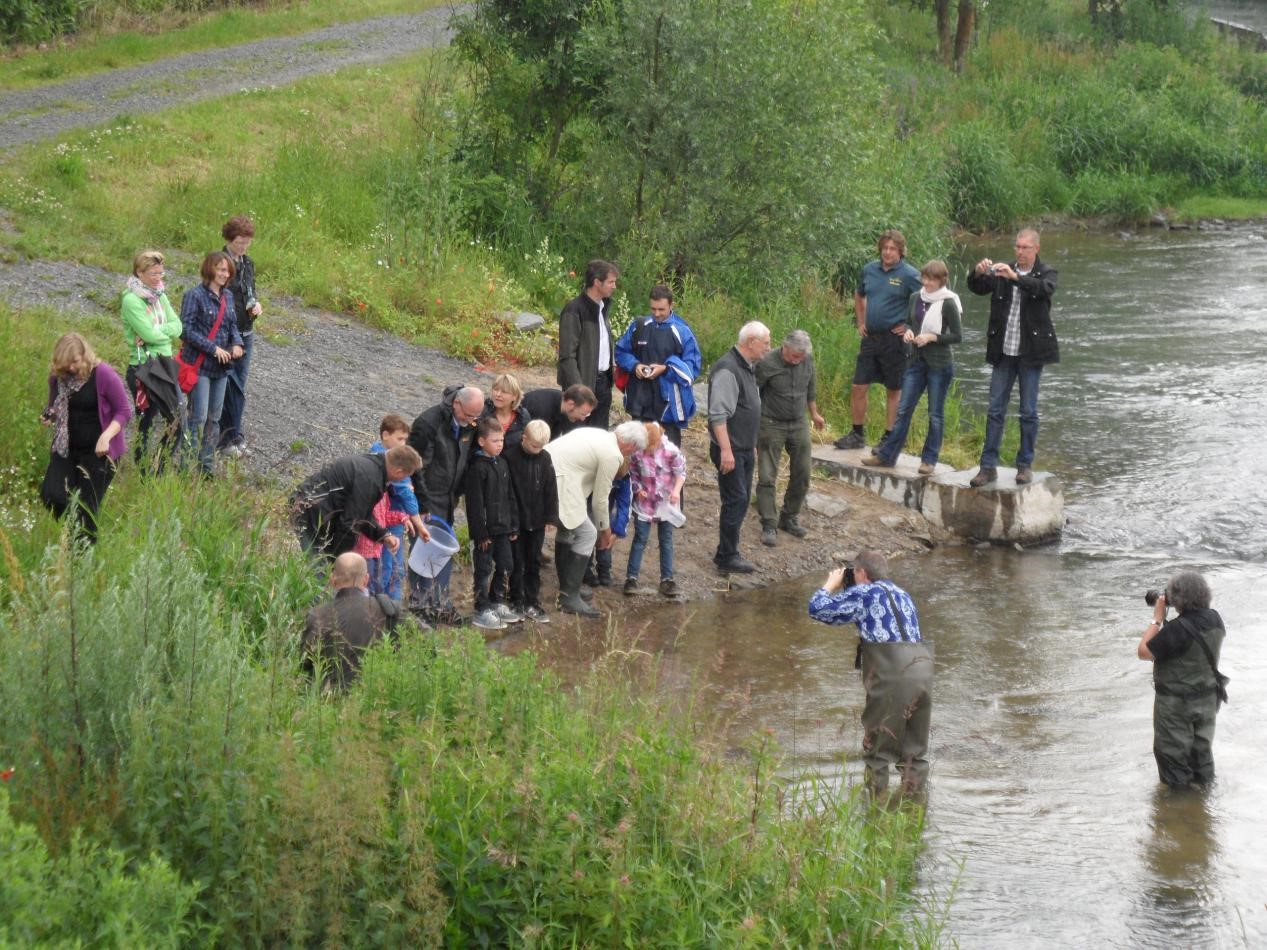 27th June 2012 – Members of the public release young burbot into the Lippe to help with restocking.

With this transformation, the largest obstacle to fish migration between the inner city area of Lippstadt and the weir system on the Boker canal in Paderborn has been removed. Although alterations to smaller weir systems are still necessary, a section of the Lippe that is around 35 km long has become largely habitable for a diverse assemblage of freshwater biota proving yet again that nature conservation and water management are inextricably linked.

Posters describing the stages of reconstruction of Weir 1 and a schedule of events for the official opening.

With very many thanks to Ulrich Detering, Civil Engineer in Water Management and Hydraulic Engineering at Arnsberg District Government, for information and photographs.